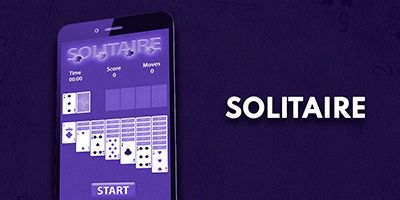 "Solitaire" is a French word and means "solitary person." Solitaire card game was not always known as such; in England, Poland, and Germany, it was initially known as "patience." The game is known as "Kabale" in Scandinavian nations. These titles all refer to the card game's fundamentals: it needs a great deal of patience and time, but it also makes players happy when they win. Because this is an unaccompanied game, the source of the name "solitaire" is "sol," which means "alone."

Playing solitaire requires the use of the brain, allowing specific mental talents to grow and different skills to develop and strengthen over time.

Did you know that Solitaire is a card game genre rather than a specific game? Because solitaire has been around for almost 200 years, there are several varieties of the game. Find out more about this fascinating genre in this article.

What is your sweet escape when you are bored at work? Many would say it is playing solitaire. Solitaire is a single-player card game that is pre-installed with Microsoft Windows. You can play the solitaire card game to kill some time and divert your attention from everyday stress.

The game of solitaire has a long and illustrious history. We can't put it down to one individual, but it's one of the greatest solo card games out there.

Card solitaires are said to have started at the end of the 18th century in the Baltic area of Europe, probably as a type of fortune-telling; where the outcome of the game signified if the player's wish would come true.

Since then, hundreds of variations of the solitaire card have been recorded, many of which are minor variants of one another and all of which may be classed into one of a few fundamental kinds of solitaire formats.

The most popular variation of the Solitaire card game is Klondike. So much so that when the name "Solitaire" is used alone, it typically refers to this game. Its origins are unknown; however, it is said to have originated during the 19th-century gold rush in the Klondike area of Canada, from where it gets its name.

Spider solitaire gets its name from the eight foundation piles that must be stacked, just like the eight legs of a spider. It's one of the most popular two-deck patience games on the market. Most people play this Spider solitaire game with two regular decks of cards; however, this makes the game extremely challenging. There are Spider One Suit and Two Suit solitaire card game versions that use 104 cards but only use the Spades in one suit and Spades and Hearts in the other. To make up the numbers, more packs of cards are necessary. This makes it easy to play this solitaire game.

Another popular solitaire card game variation is Pyramid. To make the Pyramid, you'll need a deck of 52 playing cards, with 28 of them dealt face up. The pyramid is made up of seven rows of cards, with a single card on the top row and seven cards on the seventh row. The remaining cards are piled together, face down.

The four empty spots above the tableau that are used for temporary card storage are referred to as "FreeCells." You can only move one card at a time under the rules, however, the Freecell Solitaire may be used to transfer bigger sequences of packed cards between tableau columns.

How To Play the Solitaire Game?

To win, sort all the cards into the four vacant foundations piles by suit color and numerical sequence, beginning with Ace and working your way up to King.

Tableau: This is the section with seven columns, the first of which has one card and each subsequent column containing one more card. Every pile's last card is turned over face up.

Stockpile: Here you can draw the remaining cards, which you can subsequently use in the game. The cards are discarded if they are not utilized. After all the cards have been turned over, the remaining cards that have not been moved to the tableau or foundation can be redrawn from the stockpile in the center of the table.

Taking Part in the Game:

How to Play Solitaire Game Online?

There are variations of this popular card game available online. Here are a few Apps and websites that you can play on:

Msn Games: The msn website is one of the most popular go-to places to play games online for pure entertainment. It offers a plethora on online gaming options and you can play the solitaire game online on this website.

Microsoft Solitaire: You can play games like Klondike Solitaire, Pyramid, Spider Solitaire, Freecell on this app.

Card Games: Solitaire, spider solitaire, Hearts, Free Cell, Spades, and other games are available on this basic platform. On this platform, you do not need to sign in to play.

Google Solitaire: You can play solitaire online on google. You can play both easy and challenging Solitaire card games here. You also don't need to register for this Google gaming platform. This platform's visuals are basic but engaging. The sound effects in the game are virtually identical to those in the original edition.

What Are the Solitaire Rules?

Below are a few solitaire rules:

We understood how to play solitaire and the solitaire rules above. Let us now look at a few solitaire tips ahead.

How to Play Solitaire Tips

Knowing the rules for your version is one of the most important tips when playing solitaire. Some solitaire variants allow players to draw three cards in succession rather than one from the stockpile when they have no available moves. You may play solitaire of different types online, each of which requires you to play in a somewhat different method. However, some general guidelines can be applied to every solitaire game:

Once you have mastered the rules of the variants you will be playing, it is a good idea to put your newfound knowledge to the test by playing free online solitaire.

The goal is to stack the four suits of cards in ascending face value order from Ace to King, then down to three and two. The game you are playing will determine which suits must be matched. Spider solitaire, for example, requires players to build stacks by matching alternate-colored suits. In most cases, the face of a king card must be placed in a space on the game board.

Players must have four clean piles at the end of the game, each with a top card of two in the corresponding suite.

How to Win Solitaire Games Tips

If you are interested in card games, you must have heard about poker? It is a trending game that is played by adults. The game involves real money gaming!

The Advantages of Playing Solitaire Online

Solitaire is a popular card game played all over the world, and free online Solitaire is even more popular. There are numerous causes for this:

You can play solitaire online on any website that hosts online card games. If you are a Microsoft Windows user, you can go to the windows option on your computer system and play a solitaire game.

One of the best websites available on the internet is Spartan Poker. They offer a sign-in bonus to new players and you can then increase your wealth by participating in their freerolls and poker tournaments to earn real money.

Q.1) How do I find my solitaire game?

If you have a windows computer then you will probably have the Solitaire game pre-installed on your computer. But if that option is not available, you can just google it and you will find a lot of results pop up. You can even download the Microsoft Solitaire App and play solitaire online.

Q.2) Is solitaire good or bad?

Solitaire is actually a very good game to hone your mental skills. It requires discipline, patience and a lot of strategizing against yourself.

Q.3) What is the most difficult Solitaire game?

The most unconventional Solitaire card game online will be Pyramid Solitaire because it employs a different approach than the other variations of the game. Here you need to add cards up to 13 in order to be able to discard them.

Here are Some Other Solitaire Games: