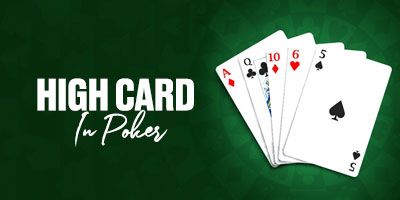 When it comes to playing poker, it is all about winning the pot. And for that, you need to have the best poker hand at the table. Experienced players are swift in making and using the perfect probable hands, whilst for beginners, it can take a bit of time to learn them. Either way, they all understand that in poker, it's always about having the best hand. A Royal Flush ranks the highest, while a High Card ranks the lowest.

Most poker games are played with the 52-card French deck, including the most popular form of poker – Texas Hold’em Poker. This creates nine unique poker hand rankings that a player can use and countless ways that those can be formed in combinations from different suits and individual card ranks.

Amongst these nine different possible poker hand ranks, this ranks at the bottom, the last position. Having a high card in poker means for a player to not have any special cards. From the cards he has, the best one would qualify to be the High Card.

Let’s Look at This With the Help of an Example:

Apart from being the least ranking of all poker hands, this term is also used in another context. In the showdown, the last round of the game, the two players remaining have the same poker hand, then the one who has the highest card within their 5-Card poker hand determines who wins the pot.

Let’s Understand this With the Help of an Example:

The winner of the pot would be player B, as an Ace is a card ranked higher than the King. From this, we know that besides playing the role of in poker hand rankings, it can also act as a potential tiebreaker. In case the players have the same card, then the second-highest among the playing five will be considered to be the highest card. This continues until all five cards have been compared in case the clash continues to happen. In the rarest of all cases, when the finalists have the same poker hands, and also share the ranks equally, then the pot is split between the two.

All in all, holding this card in poker could be the worst situation you could be put in by default. However, it isn't to say that it is impossible to win from that point. Poker hand rankings are vital while playing the game of cards. However, applying Poker strategies and playing wisely to win the mental game is even more crucial. So what are you waiting for? Sign-up to Spartan to see what your cards say.