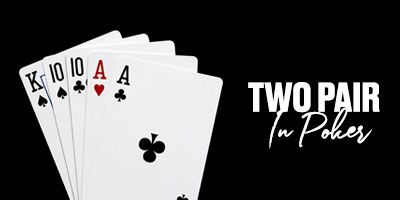 There is hardly any debate about the fact that hands and their rankings are the holy grail of poker. The end goal of every player, in every game, is to snag the pot so, it goes without saying that a poker player must know their hands pit-pat, even if woken in the middle of the night, a player must be able to recite the hand rankings. This page will discuss one such hand that you might be familiar with; the Two Pair. By the end of this, you will be well versed and ready to deal with the next best hand possibility that you get dealt at the table. So, let’s get started.

For the novice players, it is important to know the basics of this hand, and for the experienced knowing, the details about it may just put them over the edge in a game. As a result of this, no matter your proficiency, you will find some useful information as you read on.

How Can You Make a 2 Pair at the Table?

To make things clear, what could be better than an example of a hand at a Poker table. So here it is. Imagine that you are holding a pair of tens and the community cards are a five of diamonds, a three of spades, and a five of hearts. You have a good chance of winning by making a two-pair in poker because your hand will have a pair of tens, a pair of fives, and a three-kicker. However, even if you do not hold a pair of hands also do not give up hope of making this hand. Your hole cards may be a king and a ten. At The Flop when the three community cards are revealed, you may just find a match. If they turn out to be something like this, an ace, a king, and a ten you, my friend, may just get lucky and win yourself a pot.

It is quite easy to recognize a two-hand in poker; it much stands out from the rest of the hands. A one-pair hand is also striking in a set of cards and beckons the attention of players. It is also a fairly popular hand in the game and ranks at a cool eighth position on the poker hand rankings. Agreed, that is not a very high-ranking hand. So, if that doesn’t catch your eye, then maybe this will, in a game of Texas Hold’em Poker, a 2 pair is frequently a winning hand!

2 Pairs When Compared to Other Hands

As we mentioned this hand in poker ranks at a fairly low rank on the poker hand ranking charts. Only two hands rank below this hand. These are One Pair, pretty obvious, and a High Card hand. A One pair is pretty obviously a hand that contains one pair of cards with identical ranks. A high card is the lowest hand, it basically consists of a high card, that is, seven and above. So, the chances of winning with a two pair are better than with one pair or a High card.

Are You Still Confused? Let’s List Out the Hands in the Order of their Rankings So You can Clearly Visualize the Variety.

To know more about each of these hands visit our hand rankings page and become an expert.

Basic Rules of 2 Pair In Poker

Similar to most games of poker, suits do not have any relevance when considering a hand. When making the pairs, you only have to take into consideration the ranks of the cards that you are holding.

This is why two hands of two pairs that are only separated by suits rank equally.

This hand has a number of possibilities, which is why they are commonly seen. In a regular 52 card deck, there are an astounding 123,552 Two Pair poker combinations and 858 distinct ranks.

Not all pairs are of the same rank like in other hands each two pair hand has a rank of its own, some are higher than others. They are first ranked by the highest Pair and subsequently ranked by the second highest one. The fifth and non-paired card is also taken into consideration, albeit last. The fate of the hand lies in the ranks of each of the pairs and the kicker card.

In any game of poker, there is a possibility of a tie with regards to the hands that the players have at the showdown. In such cases, there is a procedure to be followed. In the case this happens then the highest Pair is used to determine the winner. If two players present the same highest Pair then the highest second pair wins the pot, and thus the winner is determined. There can still be a possibility that both the players have the exact same pairs. In this rare scenario, the fifth or the kicker card, which is non paired, is used to break the tie and results. Further, if both the players have exactly the same five-card hand that cannot be differentiated, then the pot is split. Both the players walk away from a little richer than before but a little less rich than they could have been.

5. Probability of Making a 2 Pair

Poker is ultimately a game of skill and probability. Both can be argued to be equally important at the intense table. So, knowing the probability of the poker hands that you can make with your hole cards cannot be understated. When talking about the probability of forming a Two Pair Hand you must know that it changes depending on the stage of the game.

Let is consider various stages of the game and the respective probability of forming a Two Pair hand in two of the most played poker games across poker rooms around the world, Texas Hold’em Poker and Omaha Poker.

The Flop: In the flop probability of forming a 2 Pair stand at 16.7% when you are already holding a pocket pair. The probability drops to a meagre 2% if both your pocket cards are non-paired.

The Turn: At the Turn, the probability of forming a 2 Pair stands at 19.15% when you are already holding a pair.

The River: Surprisingly at The River, the probability increases to 19.57% when you already are holding a pair.

The Flop: In the flop probability of forming a 2 Pair stand at the same 16.7% as in a game of Texas Hold’em Poker when you are already holding a pocket pair.

The Turn: At the Turn the probability increases by a small margin, making it 19.56% when you are already holding a pair.

The River: At the River, the probability is a solid 20% when you are already holding a pair.

Two Pair is considered a strong enough hand in Texas Hold’em Poker. It is often enough to win a player the pot when playing stacks, especially if it is a high-ranking two pair. Various considerations that you need to be taken into account when stacking off with this kind of a hand. It is always better to be sensible, calcite odds, and observes your opponent’s moves, like in all cases, except of course if you are holding a Royal Flush. Well, then you can go nuts with your betting. For more interesting information and even more fabulous games head on to Spartan Poker and experience the new age of poker gaming from your home.

In, India Spartan offers you poker tournaments that you have never seen before. If you are a new player, sign up to receive an instant bonus and a welcome bonus too! Try your hand at the daily freeroll poker and stand to win rewards that will keep you coming back for more. With cars and international vacation packages up for grabs, what else can you expect? Once you are registered with us, we have another sweet little surprise for you. Our very own community at Spartan Poker thrives with our VIP Club.

This VIP Club provides our players with exclusive access to online poker tournaments that wield amazing rewards and gifts galore. The VIP Club could get you a new luxury car for you to take a joyride around the online poker gaming scene. Head on now and become a Spartan.