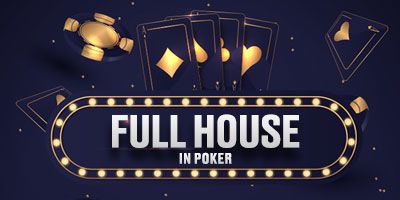 Have you been playing poker for a while? Well, you would already be familiar be the critical poker hands rankings that help you to determine the strength of the hand that you possess. There is a long list of such hands and ‘full house’ is one such hand that is quite powerful. But, how powerful is the full house in poker? To put things in perspective, there are just two other possible hands (straight flush and four-of-a-kind) that can beat a ‘full house’. So, it is literally very powerful and can help you win bets / games in different poker game variations. So, what exactly does the full house in poker indicate? How can you identify full house cards while playing in poker tournaments? Let us know more details about the same here.

How do you make a full house in poker? You simply have to form it by combining three cards of the same rank with two cards of another rank. In other words, you combine ‘three of a kind’ with ‘a pair’ to make the full house with a five-card poker hand. These full house cards are also known as boats or full boats.

Let Us Understand Full House as per Poker Rules, with Examples Below:

Let us consider another example to get more clarity about how to understand the rank of a full house hand. Say you are playing poker with another player and both of you manage to get a full house as under:

In cases where both the players have the same ‘three of a kind’ in the full house, then, the ‘pair’ will become the deciding factor. Such situations can arise when you are playing any poker variant with two decks of 52-cards. Let us understand this with the same example as above with a different set of card combinations for the full house hand:

In the above situation, both you and the opponent would feel fairly confident of winning the bet with your full house hand because both of you have the strongest possible ‘three of a kind’ in your full house. But, here the winner will be decided by who has the strongest possible ‘pair’ since it’s a tie for the ‘three of a kind’. As your pair of 9s is higher than the opponent’s pair of 8s, you will be the winner here!

You start with the following betting rounds (sequentially) in the game of poker:

You need to be careful with placing a bet on a full house. While it is a strong hand in several poker variants because it can potentially lose to only two other hands – four of a kind and straight flush, but, there are chances of your full house hand losing to other stronger full houses managed by your opponents. This makes it critical for you to be cautious if the risks and bets involved are high. You should target having the strongest possible ‘three of a kind’ in your full house.

Making a full house could put you in a strong position in several games of poker. However, you need to consider that there are just two stronger hands possible than a full house. At the same time, there are many full house combinations that can possibly be higher than yours – so you could potentially lose to them. Thus, your aim should always be to create the strongest possible full house in poker by following the various poker full house rules discussed here.

You can practise achieving the goal of creating a full house hand in poker by playing online poker at Spartan Poker. Just download the Spartan Poker app and start playing poker online.