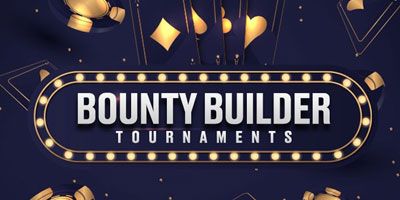 Just as you think that the stakes could not get any higher, we bring to you bounty builders, a type of knockout tournament that keeps the action high and the stakes even higher during all times. The tension in these poker tournaments is on a constant rise given that each player holds a bounty attached to their head. This allows you to double your profits along the way as you eliminate players and win to add to your prize.

How do Bounty Tournaments Work?

These knockout tournaments are played in a Multi-table poker tournament setting where the stakes are higher than ever, and the competition is a lot more fearsome. This is due to the introduction of an additional factor in the game in the form of a bounty system which allows you to stand a chance to win more. If you are able to knock a player out, their bounty is now yours in terms of chips which in some time allows you to almost freeroll. You do not need to pay any extra fee for your bounty as it is part of your buy-in amount.

As far as strategy goes for playing these card games, you must be more aggressive. While you mustn’t be too obsessed with only collecting bounties in the initial stage because the prize value is much higher, it is in your better interest to try to and slowly gain those bounties since it allows you to play more freely as the game progresses. Given below are points to remember regarding the structure of these poker games which you can make use of to plan your gameplay.

How Do Eliminations Occur?

Simply said, you can knock out and win the bounty on your opponent’s head by winning a hand. You must also have more chips than your opponent, and they must be all-in. If multiple players are involved in winning the pot, and one player is eliminated, then the one with the winning hand will only win the bounty of the eliminated player if they have the losing player covered. If not that, then the winner of the side pot also claims the bounty. In case of a tie during a multi-way pot and the eliminated player is covered by both players holding the winning hand then the bounty amount is divided between them equally.

How Are the Winnings Awarded?

The bounty winnings will be given to the player only after the completion of the tournament. If you have won the tournament, you will receive the amount of your own bounty while also getting the amounts of all the bounties you’ve collected. Regular tournament prizes are also given as per the structure provided before the start of the tournament regardless of bounties.

Progressive knockout tournaments (PKO Tournaments) bring an exciting twist to the usual knockout tournaments. Here, the bounty on the players is not fixed. In fact, it increases with time as the tournament moves forward. Each time you knock a player out, you receive 50% of their bounty directly to your bankroll, and the remaining is transferred to your own bounty. This pattern accelerates the aggression of the game.

Poker is the king of game variations, and while Texas Hold’em and Omaha poker may take most of the spotlight, games like Americana Poker and knockout tournaments like bounty builders are often a pleasant surprise. By registering yourself on Spartan Poker you can play these and many more such poker game to give yourself the ultimate poker experience on one of India’s largest poker rooms. So, join Spartan and get started with online poker.