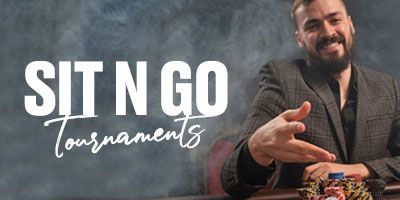 SNGs (Sit and Go tournaments) are online poker tournaments that begin once a certain amount of players have registered. The number of players, length of blind levels, prize distribution, buy-in value, and other factors can all affect the outcome of an SNG.

For those who do not wish through the gruelling days and long hours of Test Cricket, T20 serves as a manner of relief and entertainment. This shorter format of the game is for those who wish to cut to the chase, keep it short and the stakes high. Well, poker is no different as it has its own shorter format that has all the elements that the game has at its core, but it is a lot quicker with much more fun. Sit and Go poker, also known as SNG is a true fan favourite that stands true to its name.

In this format of the game, the poker game is played at a faster pace in an elimination style. The one whose chip sizes shrink and disappear will automatically exit and those remaining proceed further. This is an excellent style of poker for players to indulge in with time constraints or who feel they aren’t ready for the big stage yet.

SNG tournaments are occasionally played in live events, particularly at the WSOP, but they became a major part of the poker business when online poker took off in the early 2000s. Due to the inconvenience of waiting for scheduled tournaments to begin, online sites introduced SNGs as a viable option, and the SNG to grinders was created.

SNG Tournaments Can Be Characterized By Their 3 Phases:

A Sit and Go (SNG) Poker Event is a single table, no-limit online poker tournament that begins when the required number of players has registered.

Here's How to Play a Sit and Go:

The player who sits next to the "dealer" pays the small blind.

Step 2: The cards are dealt, and the first round of betting begins.

The following are some of the options:

Fold: You discard your cards

Bet: If no one has placed a bet before you, you may place any number of chips in the pot.

Call: If someone has bet before you, a call is to match that bet.

Raise: A raise adds more chips to a bet placed before you.

Check: If no one has placed a wager before you, you can do so.

Step 3: Flop and second betting round.

Step 4: Turn and third betting round.

Step 5: River and last betting round.

Step 6: Showdown At the showdown, all remaining players disclose their cards to determine who has the best poker hand and will win the pot.

Here are some SNG tournament rules and guidelines that you should bear in mind for an easy experience at the table:

How to Play Sit n Go?

Play Conservatively in the Early Rounds

The blinds are low for the first 20-30 minutes of a Sit & Go and there is no pressure to gamble.

Even if you can limp, ordinary hands may quickly deplete your chip stack in the early stages.

While the A-K starting hand is very common in smaller Sit & Go tournaments, players hoping for regular victories should avoid overvaluing it.

Q.1 How do you play sit and go poker?

SNGs (Sit and Go tournaments) are online poker tournaments that start once a specified number of players have signed up. The number of players, length of blind levels, prize distribution, buy-in value, and other parameters can all influence an SNG's outcome.

Q.2 What is the difference between sit and go and tournament?

Q.3 What is the gap concept in poker?

The difference between raising and calling a raise preflop is referred to known as the "Gap Concept." According to this rule, you must have a stronger hand to call a raise than you would need to raise yourself if no one had joined the pot.

Poker is a game of variety. You could also stick to your regular Hold’em, or you could mix things up from time to time with Sit and Go Poker tournaments, 7-Card Stud, etc. If you are willing to explore the endless world of poker and earn a fortune for yourself, make sure you learn the game entirely, and our Poker blogs will help you to upgrade your knowledge. Once that part is taken care of, you can download the official Poker app to start playing all the poker variants that excite you. Not only that, but you also put yourself in line to win a number of rewards, VIP exclusive poker games and welcome bonuses. Join Spartan Poker and play poker online at the highest level in India.