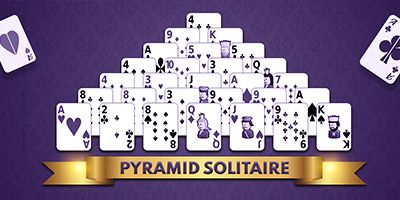 What is Pyramid Solitaire?

If you love playing the traditional solitaire game and are looking for a slight twist and entertainment during the game, you can try playing the pyramid game. In this game, the cards are arranged in the form of a pyramid. This is the reason it is named ‘Pyramid Solitaire’. The pyramid solitaire game is fun to play and is easy to learn.

How to Play Pyramid Solitaire Game?

2.  Then, you have to make a pyramid with the cards. Place one card on the top, two cards in the second row, three cards in the third row, till you reach a point where you have seven cards in the last row.

3.  Make sure that each row is overlapping the previous row.

4.  There will be 28 cards in the pyramid once you have finished distributing the cards.

5.  All the other cards are kept face down on the table.

This means that if you get a king, you can discard the king in the game directly. Cards and combinations of cards that can be discarded are given below:

Cards And Combinations Of Cards That Can Be Discarded

Alternate Way Of Discarding Cards In The Pile:

How To Win Pyramid Solitaire?

You can win the game if all the cards have been removed from the pyramid of cards. Or else, if the pile of cards is exhausted.

1.  Poker is a game of skills that is played with real money most of the time.

2.  Only adults are allowed to play the game.

4.  Usually, two to eight players are required to play poker.

1.  Pyramid Solitaire is a fun game that can be played by a single player.

2.  Adults as well as kids, both can play the game.

4.  Pyramid solitaire is mostly played for leisure. A single player can play this game.

While solitaire or pyramid solitaire online is a great game to kill some time, you can play online poker and win real money.

Spartan Poker is an amazing poker platform to show off your poker skills and win real money. Register on Spartan website. Download the Spartan Poker official poker app on your mobile phone to play real money games. So, what are you waiting for? Start playing online poker now! Win real money daily.

Q.) How many levels are in Pyramid Solitaire Saga?

There are around 10-12 levels in the Pyramid Solitaire Saga.

Q.) Is every game of Pyramid Solitaire winnable?

Q.) How do you do the Pyramid Solitaire?

The cards are arranged in the form of a pyramid in a pyramid solitaire game. There is one card in the first row, two cards in the second row, three in the third row, and so on till you have seven cards in the last row.

The majority of the games are solvable and some might be unsolvable.