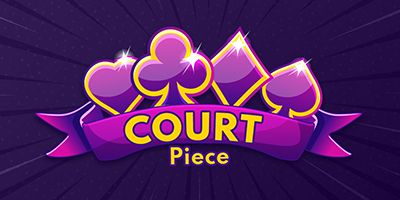 What is Court Piece (Rung) Game?

Court Piece game is a thrilling trick-taking game popular in India and Pakistan. When it was first rising to prominence in the world of RMG, the Court Piece Game was called many names like Court Pees and Coat Piece card game in India, and Rung or Rang in Pakistan.

Whatever the name it is known in different regions, the essence of the game remains the same- It's fun, engaging, and competitive- 3 things we love in all our family-friendly games.

Objective: The objective of this fast-paced trick tracking game is to win as many tricks as possible. You can use various strategies to achieve the end result.

Requirements for Court Piece Game: Court Piece is a four-player game played by 2 pairs of partners. Each player sits across from his/her partner at the table. The standard 52-card deck is used in this game.

Card Rankings: Trump is in the highest-ranking card group. So by extension, the A of trumps would be the highest ranking card, and the card rankings would follow according to the hierarchy of the cards from the trump suit.

Requirements for Coat Piece: Court Piece is a four-player game played by 2 pairs of partners. Each player sits across from his/her partner at the table. The standard 52-card deck is used in this game.

How to Play Court Piece?

Do you think learning the Coat Piece game will be challenging!!

In the hands of a good mentor, learning anything new can be fun and easy. So, allow me to step up to the plate and help you learn how to play court piece

Partnerships and the first dealer can be determined in a variety of ways, withdrawing for low cards being one of the most common.

Trumps: The highest-ranking suit which is usually decided by the player/team that wins. (There are other rules to determine trumps as well. Keep reading for more information….)

Cut the Deck: Picking a random amount of cards from a shuffled deck and placing them at the bottom of the pile. The top cards are dealt to the players.

Trump Caller: The person to the dealer's immediate right is the ‘Trump Caller’. The Trump caller is responsible for declaring the trump suit.

The essence of the game remains the same, but to add extra spice to the fun, a few twists are given to the variations to differentiate them from the original.

Here are a few:

The following are the court piece rules.

After all thirteen tricks have been completed, the hand is scored as follows as per court piece rules:

The game concludes in a draw if both sides have earned the same number of Courts.

Just like Pepsi was inspired by coca cola, and Balaji wafers are a variation of Lays, variations of court piece games have developed over time. Check these out:

Trump Card Show: Instead of calling a specific trump suit, in this variant, the Trump Caller chooses one of his first five cards and places it face up on the table. The suit of the chosen card determines the trump suit for the hand. Even though this card remains on the table in front of the player, it is still considered a part of the Trump Caller's hand. As a result, he would play this card at the right time, just as if it were in his hand.

Double Sir: With one exception, Double Sir is played exactly like Court Piece. This change, however, is big enough that it can radically alter the tactics used by the game's players. Completed tricks in Double Sir, also known as Double Sar, are simply turned face down and left in the center of the table until the same player wins two consecutive tricks. At this point, the player who has won these consecutive tricks gathers the cards for this trick as well as all previous cards from tricks that are still in the center of the table and sets them face down beside himself for counting later.

After capturing the center pile, the player needs to win two consecutive tricks to capture the cards in the center of the table. If there are still completed tricks in the center of the table after the last trick is won, the player who won the last trick captures all previously uncaptured cards. At the end of the hand, each partnership is credited with the number of tricks won based on the number of four card tricks they have in their possession. This game is played just like Court Piece in terms of scoring and all other factors.

Online poker games are played to have fun. Did you know that many players use online poker to earn real cash? Spartan poker has daily poker tournaments. Poker players can compete with opponents and beat them to win money.

Court Piece is a card game where players must get the highest points to win.

The team that wins seven or more tricks during the hand is said to have won the deal in court piece.

Ace is the highest card in the court piece. This means that the person who plays the Ace of any suit is the winner of the coat piece trick. And if the Ace of trumps is played then the trick is a sure shot win.