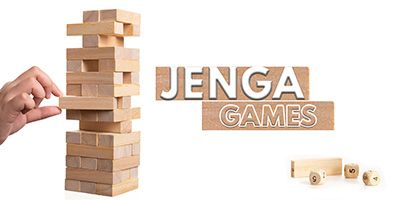 Do you spend your Sundays fighting Monday Blues? We have an amazing Sunday plan for you! Play Jenga at home and begin the new week with a bang! Jenga is a game of physical skill and strategy. 54 wooden blocks of the same size and shape are used to play the Jenga game.

To begin with, stack the wooden blocks into a Jenga tower. Once the Jenga tower is created, the person who stacks the Jenga blocks goes first. On each turn, players remove one block from any level of the tower, and to finish it, they place it on the highest level possible. After that, players take turns moving the pieces about until the Jenga tower collapses. Keep your hand steady while moving the blocks! When the Jenga tower falls fully or if any block falls from the tower, the game is over.

Benefits of Playing the Jenga Game

How To Play Jenga Blocks Game?

How to Make a Jenga Tower?

Let us look at the points above in further detail and then learn how to play Jenga ahead.

After knowing the basics of how to play Jenga, have a look at the Jenga rules listed below.

Play the Jenga Game with Rules

Lastly, try to be a good sport. Respect other players and don't go out of your way to sabotage their turns. Others may not want to play with you again if you make the game less enjoyable for them!

Make an Effort to be a Good Sport.

Online poker games can be played 24/7 from your smartphone or laptop. Players can win up to Rs 30,000 daily. There are a variety of games that you can play online such as Texas Hold’em Poker, Omaha Poker, Omaha Hi-Lo, Chinese Poker, and many others. What is stopping you from playing online poker and winning money daily? Use your smartphone in a better way. Download the Poker app on your mobile phone now and start playing poker! See you at the poker tables.

Q.1) What are the Jenga rules?

Remove one block from the tower at a time, stacking it on top of the previous one. The game is won by the last player to stack a block without causing the tower to topple!

Jenga is an excellent game for enhancing decision-making abilities and hand-eye coordination.

Q.4) What are the benefits of playing Jenga?

Q.5) What does Jenga stand for?

Jenga is derived from the Swahili word Kujenga, which means "to build".