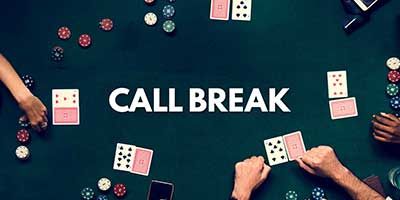 What is a Call Break Game?

The call break card game is popular In South Asian countries, particularly in Nepal and India. Before the first round begins, the sitting direction and the first dealer are chosen. Although the origins of this game are uncertain, it is thought to be based on the popular card game named spades. This game is also known as Call Bridge, Locha, Ghochi, or Lakadi game in some parts of India and Bangladesh.

You can make a call break game download and play the game once you understand the call break rules given below.

In the call break or call bridge game, the player on the dealer's right gets to throw first, followed by the player who wins the trick, who then leads the throw. Each player is required to toss a high-rank card of the same card suit as the first thrower.

A maximum of four players are required for the call break taas game.

How to Win the Call Break Game

You can sign up for several online card gaming sites that host various tournaments where you can earn money. You must, however, check that the card game platform is trustworthy, with a large user base and legitimate internet evaluations.

How to Win a Call Break Game?

As previously stated, a player must score at least the number of tricks he committed to at the beginning of the game. Any player that does so will receive points. A player earns a penalty if he or she fails to score the required number of tricks.

Look at the following example to get a better understanding of the Call Break scoring system.

There are a few more factors to keep in mind if you want to win the call break taas game regularly. Once the cards have been dealt, you should immediately assess the number of bids that are feasible and bid accordingly. The most valuable card is the spade; utilize it carefully when you play call break game real cash.

No-Limit Texas Hold’em Poker is a common favorite of poker players. People play poker games to get entertained or to earn money. Texas Hold’em is popular among the real money earning games in India. Learn how to play texas holdem poker here.

How To Play Texas Holdem Poker?

Texas Hold’em poker is played with cards. It is played online between six to nine players. Each player who joins the game is given two cards that only they can see. Once they see these two cards, they must start betting in the first round of the game known as the pre-flop round.

Every poker game starts with blinds. Blinds are nothing but mandatory bets added by any two players for the game to start. It is after the blind are added that the players can start betting.

There are three betting limits. Fixed limit, pot limit, and no limit.

There are four main rounds in Texas Hold’em poker. They are preflop, flop, turn, and river.

Players who reach the last level of the game then show their cards to each other. A player who has the best five cards wins a showdown.

A poker player is decided based on their poker hands ranked. There are a total of ten poker hand rankings. The highest to lowest ranks of poker hands are mentioned below.

Hope you understood the basics of Texas Hold’em poker. Practice a lot of games with your friends or play casino games online for free to become a skilled poker player. You can then start earning money regularly with top real money earning games in India.

Whether you are a beginner wanting to learn how to play poker online or an experienced poker player looking to polish your skills by playing against the best, you have come to just the right place.

Look at all the reasons to play poker and earn real money with Spartan Poker.

After cards are dealt in the call break game, players decide upon the number of tricks they would win. This is known as call bidding.

Q.2) How Scores Are Calculated In Call Break?

Q.3) How Many Rounds Are Played In A Call Break Game?

There are five rounds in the call break game.

The rule of call break is that each player must call a hand. Players aim to break the call and win the maximum number of hands.

Q.5) What Is The Meaning Of Call Break?

The meaning of call break is derived from its gameplay. Each player calls the winnable hand. They must break the call and win as many hands as they can.

Q.6) How Do You Play Multiplayer Call Break?

A deck of 52 cards without any jokers is used to play multiplayer call break.