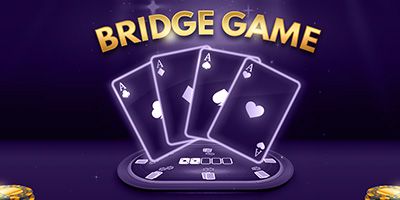 What is a Bridge Game?

Bridge game, often known as contract bridge game, is a trick-taking card game played with a regular 52-card deck. In its most basic version, it is played by four players in two competing partnerships around a table, with partners seated across from one other. The game is divided into several deals, each of which goes through four stages.

The dealer deals 13 cards face down to each player, one at a time, starting with the player on their left. Each pair tries to gain points by placing a bid or defeating the bid of the opposite partnership. At the end of this card game, the team with the most points wins.

When you just play bridge online or the live bridge game you need to know how to play bridge games. So here is a little crash course that will help you win against opposing teams in the bridge card game.

According to the bridge card game rules, you will need to choose a dealer, dummy and defence.

The "declarer" is the player in a pair who is the first to mention the suit or notrump that will become the final contract.

The declarer's companion is the "dummy."

The "defence" is made up of the opposing team.

But, before we get into the meat of the matter, there's one thing you should know about bridge game rules that sets it apart from other card games: the lingo.

When you play poker online, you can make a lot of money. But just like the other cash games out there contract bridge online is also an option to seriously consider if you want to make some money on the side.

After all, it's always best to have more than one option to play within the online cash games genre.

Learning how to play bridge is easy if you follow the steps mentioned above and keep the bridge game rules in mind. You can also practice your skills when you just play bridge online free.

Q.1) What is a bridge contract?

Contract Bridge game is the most common variety of bridge, in which the declarer receives points counting towards bridge card game and rubber only for tricks he bids as well as makes, any overtricks receiving bonus points

Q.2) Why is it called contract bridge?

It is called a "Contract bridge" because it required a partnership to commit to a contract of a certain number of tricks.

Q.3) What is the difference between a rubber bridge and a contract bridge?

A rubber bridge game is a form of contract bridge played by two competing pairs using a particular method of scoring. A rubber is completed when one pair becomes first to win two games, each game presenting a score of 100 or more contact points; a new bridge card game ensues until one pair has won two bridge card games to conclude the rubber.

Q.4) How do you make a contract in the bridge?

Yes, but the Bridge game is also a partnership game. In order to grasp the language of the bridge, players spend countless hours studying bidding conventions and signaling systems.

Q.6) How do you bid on a contract bridge?

Here are Some Other Similar Games: