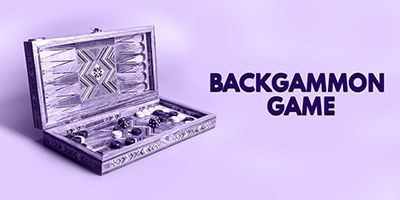 Backgammon has been played for almost 5,000 years, which is proof enough that it is a lot of fun. It's one of the oldest board games in the world right now! The backgammon board game appears difficult at first, but once you get the feel of it, it's very simple.

Objective: Two players move their pieces across twenty-four triangular points on a dice-based board game, with the first person to remove all of their pieces from the board winning.

How to Play Backgammon?

Backgammon is a two-player game played on a board with twenty-four narrow triangles known as points. The Backgammon triangles are color-coded and divided into four quadrants, each with six triangles. The quadrants relate to a player's home board and outside board, as well as the opponent's home board and outside board. A ridge running down the centre of the Backgammon board game called the bar separates the home and outer boards.

When playing the backgammon board game, the players sit on opposing sides of the board, facing each other. The home board for each player is in the right quadrant nearest to the player. The outer boards, which are in the left quadrant, are opposite each other, as are the home boards.

The player moves his Backgammon checkers counterclockwise in a horseshoe pattern from the direction of the other player's home backgammon board game.

In most Backgammon boards, the triangles are numbered from 1 to 24, with the 24th point being the farthest point from the player and 1 being the rightmost triangle on the player's home court. The players must move their pieces from opposing sides of the board, so one player's first point is the other player's 24th point, and so on.

Each player rolls a single die to begin the Backgammon game, and the player with the higher number moves first, using both numbers rolled. If both players get the same number, the dice are re-rolled until they get separate results. After that, the players take turns rolling two dice at the start of each turn. The dice must always be rolled together and drop flat on the game board's right side. The dice must be rolled again if it lands outside or on a checker.

The Differences Between Poker vs Backgammon

When you play poker online, you have a lot of opportunities to make money online. Here are some reasons why you should play poker and earn real cash daily.

Q.1) How do u play backgammon?

Backgammon is a two-person game in which one player sits on each of the four quadrants of the board. There are six points in each quadrant. The fundamental goal of the game is for a player to remove all of their checkers off the board by following the Backgammon rules and playing the backgammon board game correctly.

Q.2) Is backgammon a skill or luck?

Backgammon is a skill game, and the higher your skill level, the more likely you are to win. Tournament and match outcomes have confirmed this time and time again. However, it can only be proven over time. In the short run, just about anyone can beat just about anyone if they have enough luck, and dice are luck.

Q.3) Why was backgammon banned by the Catholic Church?

Back in the day, the Catholic church didn't approve of a number of things. Backgammon was one of these things, which they outlawed in the sixteenth century. They ordered the boards to be destroyed, along with a number of other banned publications.

Here are Some Other Similar Games to Backgammon: