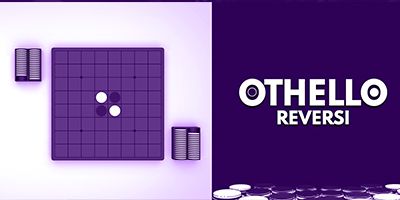 What is Othello Game (Reversi)?

Othello game is a mind game that is played on a board.

How to Play Othello Games Online?

Have a look at how to play Othello game below.

The Game Is Over

As per the Othello rules, the game is over when neither participant can advance any further. The discs are now counted, and the winner is the player who has the most of his or her color discs on the board. There is a chance of a tie.

How to Win in Othello Game?

Minimization of the Disc

In the vast majority of cases, the player with the fewest discs wins. As a result, good Othello players will frequently select movements that flip the fewest discs possible, preferably only one.

By avoiding the "X" squares, you can safeguard the corners. These are the squares that form a circle around a corner.

Edges Should be Balanced

After the corners and neighboring spaces, the borders of the board are the next most essential squares to control.

A skilled player can attack an uneven edge by giving you a corner to take the other corner and the entire edge in between.

Be Aware Of The "Danger Zone"

Moves Can be Saved for Later

Moves that you can make but that your opponent won't be able to make should be saved until last.

At the endgame, try to keep the diagonals under control. You'll be able to play an X square without losing the corner this way.

In the Beginning, Keep It Quiet.

Stay in the Middle

Reduce the Options Available to Your Opponent

"Edge Creeping" Should be Avoided

Playing the edges may exhaust your novice or intermediate player's moves, but you're simply playing right into the experienced player's hands.

Walls Should be avoided

Long, uninterrupted lines of one-color discs seal one side of the board.

It's usually a good idea to play in a region with an odd number of empty squares if you're forced to make a terrible move late in the game.

Nowadays many types of board games are available on the web. You can play Othello online with your smartphone. To play the Othello game online, you can download the app from the play store as well.

Poker is traditionally played in casinos. However, everything that was previously unavailable is now available online. Isn't that so? People are migrating to online poker because it offers the opportunity to win real money. You can play online poker for real money in Texas Hold'em, Omaha Poker, Omaha Hi-Lo, and Pineapple Poker.

Are you looking for a way to put your poker abilities to good use and win real money? Simply get the Spartan Poker app for your smartphone. On our Poker app, there are numerous online poker tournaments. So, what do you have to lose? Install the app on your smartphone and start playing real money online poker right away!

1.) How do you play the game Othello?

8x8 square board is used to play Othello. On one side, there are 64 black discs, while on the other, there are 64 white discs. The goal of players is to have the most color discs on the board.

2.) Is Othello harder than chess?

Yes. Othello is harder than chess.

3.) How do you always win at Reversi?

You will usually win the Reversi game if you can get the corners.

Reversi is a simple game to pick up, but it is ultimately a strategy game. Each piece you place has an impact on the game's overall outcome.

5.) How do you play Reversi in Othello?

The two games look similar. However, the rules for Reversi and Othello are different.