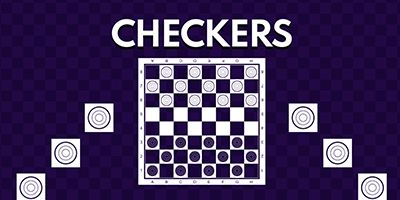 What is Checkers or Draughts?

Checkers, also known as draughts game, is a family of two-player strategy board games that feature diagonal moves of uniform game pieces and mandatory captures by jumping over opponent pieces. Checkers arose from alquerque. The term "checkers" refers to the game's checkerboard, whereas "draughts" refers to the verb "to draw" or "to move."

Historians believe the first form of checkers was played approximately 3,000 B.C.E. Archaeologists discovered it in Ur, an ancient city in Iraq. Those who have researched the history of checkers have also discovered a game known as Alquerque. It was first played in ancient Egypt around 1,400 B.C.E.

How to Play Checkers?

Let us understand how to play checkers.

The Poker game and the Checkers game are games where you need to know the rules and gave have appropriate skills. In the poker card game, every player strives to make the highest-ranking hand possible with only five cards. In contrast, checkers is a family of two-player strategy board games that feature diagonal moves of uniform game pieces and mandatory captures by jumping over opponent pieces. You can play checkers online on the internet. If you are interested in real money gaming, you can play poker and win real money daily.

Gaming for real money is exciting and lucrative. Download the Spartan Poker official Poker app and start gaming if you believe you have the ability to defeat all of your opponents and steal the prize pool! To win, use your best mental talents and eliminate all of your opponents! Now is the time to play!

1.) Which sport is also called draughts?

Checkers is a game that is also known as Draughts.

2.) Is Draughts and Chess same?

No. The physical board and game pieces of chess and draughts but rules are different.

3.) What are the rules to checkers?

Each player has 12 pieces and the goal is to capture all of the opponent's pieces by hopping over them.

4.) Is checkers or chess better?

Checkers is just as difficult to master as chess game.