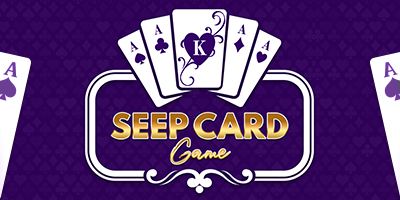 What is Seep Card Game?

Seep, sometimes known as Sip, Sweep, Siv, or Shiv is an online casino fishing game. Northern India's Seep is a card game with a 100-point total value. In Punjab, where the game is immensely popular both in India and Pakistan, another, presumably older variant is played, in which the total card value is 30 points.

A typical 52-card deck without a joker is used to play this game. This game can be played with two to four opponents at once.

The sweep card game's math is capturing cars with a point value, to bring the total to a point value of 100. The total number of spades cards has a point value equal to their capture value, ranging from 13 for the king to 1 for the ace.

Every ace is worth one point, whereas diamonds are worth six. Apart from that, only 17 spade cards, 3 aces of other suits, and ten diamonds have point values, while the rest of the cards have none. If you are new to sweep card games and are unsure how to play them, this article will assist you in learning how to play and win the game.

How Do you play Seep Card Game?

The four-player version of Seep, as described below, is played in North India.

Seep's objective is to acquire or capture valuable cards in the gaming table's arrangement (or the floor). The game is over when one team has a 100-point lead over the other. This is known as a bazzi. The teams can determine how many games or bazzis they want to play before the game begins.

A player can create piles or houses out of the cards while capturing them. Only the houses as a whole were caught. Because the remaining cards on the floor are not in-house, they cannot be referred to as loose cards.

I'm tossing a stray card down. Cards that cannot be captured by other cards or incorporated into a house remain on the floor and are known as loose cards.

Pukka Home (Cemented or Unbreakable): If you add another card with the same equal value to a delicate house of 9 to 12, you can create an unbreakable house. For instance, in a house of 11, you might add a jack or two extra cards. The unbreakable house of 11 cannot be broken down into the houses of 12 and 13.

A House (Uncemented): has a pile of cards equal to the capture value when summed up.

A Cemented House: has more than 1 card or set of cards equal to the capture value. For example, a K cemented house could consist of the following values:

If a player adds a card to a house that enhances its capture value, it can be broken. The card must be drawn from the player's hand rather than from the ground. Cemented houses, on the other hand, cannot be broken.

The Concept of Chips: You can play the game and win chips; the maximum wager amount is 100 chips. Every team places 100 chips in the pot at the start of the game. One of the teams loses the chips at the end of the game, and the winning team gets the chips. For example, if the winning team receives 65 points and the losing team receives 35, the difference is 30 points.

Rules are already so boring, so instead of wasting time reading another paragraph, let's get straight to it:

How Can I Play Seep on My Phone?

You can download Seep from the App Store and enjoy it on your iPhone or computer. Bet before you get into the game, read this article carefully to ensure that you are prepared for the most fun online seep card game.