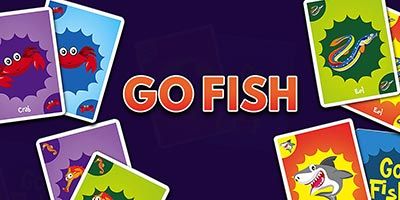 Go Fish is a delightful game that will keep even the youngest card players entertained. Go fish is a fun card game for kids. A standard card deck of 52 cards is used to play the go fish card game. The first step is to distribute cards to the players. Deal 7 cards to each player if there are 2 to 3 players in the game. Deal 5 cards to each player if there are more than 3 players. The rest of the deck is then laid out face down in the middle of the table. This is referred to as the card pool.  When one player runs out of cards or there are no more cards in the pool, the game ends. Whoever has the most stacks or suits of cards in front of them is declared the winner.

How to Play Go Fish?

Have a look at how to play go fish below.

Have a look at how to play go fish below.

Assume there are two players in the game, Krish and Robert.

Now let us take another example.

Consider player A and player B. Player A might, for example, inquire if player B has any nines.

Hope you have understood how to play go fish. Let us now have a look at the go-fish rules.

Rules of the Game Dealing Cards to the Players:

A go-fish tip or go fish strategy goes a long way in winning the game. You need to remember two go-fish strategies.

These two were the basic strategy of the go fish card game.

Let us find out about real money online poker games.

What's keeping you from playing online poker every day and winning money? Make better use of your smartphone. Now is the time to get the Spartan Poker app on your phone and start playing! See you at the poker tables.

Go fish is the term used for ‘look for cards’.

Go fish is a good game because it aids in the development of social and emotional abilities related to character.

Go Fish is popular because it is simple to learn and quick to play. The majority of games take approximately ten to fifteen minutes to complete and can be played by two to ten individuals.