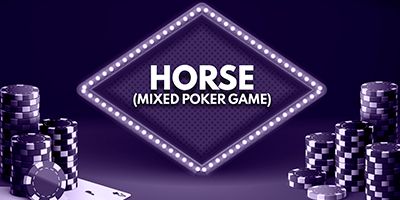 Horse poker is among many common variants of mixed games. The players often agree to play a mix of poker games in large cash games in brick-and-mortar casinos, rather than a single game. This reduces the edge a single-game specialist has and highlights the breadth of a player across multiple versions of poker. Many people feel that Horse poker and other mixed games are the best judges on the actual poker ability of a player.

Most players in a Horse poker or tournament may be qualified in one or two of the games but will have significant shortcomings in the rest of the games. Hence it will be very beneficial to become a fair player in all the variants.

Horse poker, an interesting variant of poker is based on an acronym- "HORSE." The games are always played in the following order in this game of mix. HORSE Stands for:

Usually, a horse poker tournament is played at high stakes. The standard betting structure in a horse poker game is of fixed limit. Let us have a look at the rules of horse poker.

Horse poker is a game that takes a broad range of skills to excel in, but it is possible to succeed in each game with solid poker fundamentals. It's the inherent variation in Horse poker that helps the strongest players to do so well because most players will do well in one or two games while playing average in the others at best.

It is important to bear in mind which game is being played because playing the wrong game will give you some pretty adverse outcomes. In particular, assuming that you are playing Razz while you are really playing Stud is highly counterproductive, as you want the low hand in Razz when you want the high hand in Stud. You will sometimes see a player making bets that don't make sense to fit with their up cards.

The Games that Makeup Horse Poker:

How to Play HORSE For Free

You shift from one game to the other in HORSE. The order to play horse poker is Texas Hold’em to Omaha Hi/Lo to Razz to 7-Card Stud High to Stud Hi/Lo 8-or-Better.

It's worth noting that in horse poker, all of the games are usually played in their fixed limit versions. Fans of No-Limit Hold'em may be disappointed to learn that there will be no wild all-in shoves before the flop to speed things up.

Here's how Fixed-Limit Betting works in Holdem if you need a reminder.

Have a look at the tips and horse poker strategy given below to learn the game.

When you play in a live game, the dealer will inform you about the shifts in-game in the following ways.

Let's pretend you're playing Omaha Hi/Lo while playing horse poker. You will set the blinds, and hands will be ranked using a conventional poker hand rankings, exactly like in a regular Omaha game. However, you'll have an ante and bring in instead of blinds once you've progressed to Razz. There are no community cards in this game, and the hands are not ranked in the same way.

That was a little information on how to play horse poker. Let us now see what are mixed poker games.

Q.1 What is Horse poker?

Horse poker is not by itself a variant of poker. This is a mixture of five other variants of poker, namely Texas Holdem, Omaha Hi-Low, Razz, Seven Card Stud, and Seven Card Stud Hi/Lo, either split-Eight or Great. In other durations of time, all such combinations are played at certain times.

Horse poker is pretty hard to master. Since there are 5 different types of poker, you compete in. So, you have 5 games to learn, not just 1. That requires extreme competence and determination.

Q.4 Which is the most difficult poker variant in Horse poker?

Each of these versions has its own ups and downs. All the variants are likewise demanding. You may all know Texas Holdem, but it still takes a lot of poker strategies to win the game. No, it is no easy to play. You have got to know each and master them one by one.

Whether you are a beginner in poker or an experienced player, there is something you can always learn when you play online poker. The internet has made it easy for players to play online poker. You do not have to go to a casino in Vegas to play poker. Just download a poker app like the Spartan Poker app on your mobile and start playing poker from anywhere.

Android, iOS, and desktop users can play poker and win real money 24/7*. So, what are you waiting for? Go ahead and download the Spartan Poker app on your mobile phone. Win real money daily!