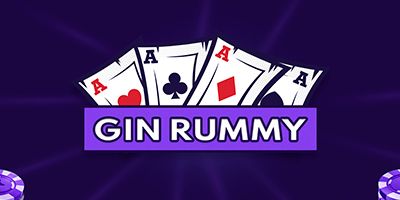 Gin Rummy is a two-player version of the popular card game called Rummy. Indians enjoy Gin Rummy as a social game as well as a real money game. Get a glimpse of how many cards in gin rummy are used and the scoring in the game.

Score: The two players who play gin rummy choose a target score which is usually 100 points. The player who reaches the score first is the wsinner. Players can play gin rummy online with their smartphone or desktop.

A gin rummy game is usually best played with two people. If there are more participants, divide them into two teams, with each player from one side competing against a player from the other. Finally, the scores of all the players on each team may be added up to determine which team will win.

Let Us Have a Look at Gin Rummy Rules in Detail.

How to Play Gin Rummy?

Below are detailed steps to learn how to play gin rummy:

Step 1: To play gin rummy online, take a close look at all ten cards in your hand and arrange them into sets or runs.

Step 2: The non-dealer can pick or discard the face-up card at the start of the card game, and the draw-and-discard process is to be continued.

(Put any other card in the image. Perhaps, 4 of spades)

Step 3: Once you've chosen a card, think about how you may use it to construct runs or sets.

Meaning of set: A set is three or four cards with the same rank and belonging to any suit.

Meaning of run: A sequence of three or more cards of the same suit is a run.

Step 4: If you don't hide your card(s) well enough from your opponent, it can provide them a hint that will help them plan their next move.

Step 5: When there are only two cards in the stockpile left and the game hasn't concluded yet, each player receives zero points at the end of the game.

Step 6: When there are no cards that are to be matched, you are said to reach a gin.

Wondering how to play gin rummy online? The answer is simple. You can make a gin rummy download on your smartphone or desktop and start playing the game!

A shutout occurs when one player does not win any rounds, and the winner receives an additional 100 bonus points.

After all of the points have been tallied, the player with the most points is declared the winner.

Have a look at gin rummy tips below -

Poker is the most profitable game. The more you polish your skills, the bigger you get to win with poker. Here are five reasons you should play on the Spartan Poker app.

Q.1) What are the rules of gin rummy?

A player achieves ‘gin’ if they pair all the cards into melds and there are no unpaired cards.

Q.2) What is the difference between Rummy and Gin Rummy?

Yes. You can play rummy with 2 players.