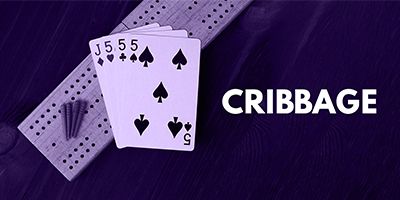 Cribbage is one of the best two-hand games, as well as one of the most popular, as it has been amusing card players since the seventeenth century.

Objective: The objective in Cribbage is to be the first player to get 121 points.

Cribbage is a card game with a fascinating history. Sir John Suckling is credited with inventing cribbage, according to Sir John Aubrey, a 17th-century archaeologist, and folklorist. Suckling, a poet, and a soldier was widely considered Europe's best card player at the time.

Cribbage was popular well into the nineteenth century and was immortalized in Charles Dickens' storey The Old Curiosity Shop. The crib game was popular among sailors since it only required two players, a deck of cards, cribbage rules, and a cribbage board. It has been played in the United States since the Colonial Period.

How to Play Online Cribbage?

To know how to play cribbage, you'll need at least two individuals, although three or four will suffice. Here are some criteria that will vary depending on the number of players you are playing online cribbage with:

The gameplay is divided into three distinct parts, The Deal, The Play, and The Show. Each part is explained in detail below.

The pone (the player who is not the dealer) starts by laying down a card on the table and announcing its value. The dealer then lays down a card and announces the cumulative value of the cards on the table. The player then says "Go" and the other player can then continue to lay down his cards until he also can't lay down a card without going over 31.

The Points System: Basic Hands When You Know How to Play Cribbage

Any cards with a total of 15 on them.

Pairs: To add a card of the same rank as the card just played, score 2 points.

Flushes (Double Pair): When you add a card of the same rank as the last 3 cards, score 12.

Three-of-a-Kind: When you add a card of the same rank as the last two cards, score 6.

Run (Three or more consecutive runs): Score 1 point for each card in the sequence. The cards do not need to be in order, but they do need to be all together.

Play online cribbage against your buddies. A two-player multiplayer card crib game that includes playing and combining cards into combinations that earn points. Online cribbage rules have several distinguishing characteristics, including the online cribbage board, the crib game, box, or kitty, a separate hand counting for the dealer, two independent scoring phases (the play and the show), aces low, and a unique scoring system that includes points for groups of cards totaling fifteen. Online Cribbage is a free card game in the manner of Trump.

Cribbage game is a challenging game that can be played with 2-6 people (not 5). Although it may seem intimidating at first, the basic game is very easy to learn how to play cribbage.

Q.2) Why is it called cribbage?

For decades, men have adored the game of cribbage. It was brought to American shores by English settlers and became highly popular in the colonies. It is thought to have been devised, or at least codified, by British soldier and poet Sir John Suckling in the 17th century. The jack of the suit that is turned up at the start of play is referred as a fool or dunce in the game. Cribbage gets its name from Suckling's addition of the concept of a crib, or trash pile.

Cribbage game is considered by the majority of players to be a game of skill rather than chance. This shouldn't come as a surprise, though, because there are a variety of psychological biases at work. One of the most common is the necessity to "guard your game” according to cribbage rules.