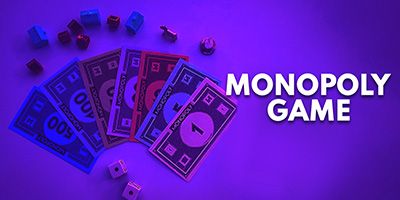 What is Monopoly Game?

Monopoly is a real-estate board game that can be played by two to eight people. The player's purpose is to keep his or her finances afloat while forcing his or her opponents into bankruptcy by purchasing and developing real estate. In the event of bankruptcy, the player is removed from the game. The winner is the last player left on the board.

Of course, playing Monopoly is entertaining, but it has its pitfalls. To begin with, the game can take a long time to complete. Second, because it is such a large game, it is not suitable for travel.

Monopoly's origins can be traced back to 1903 when American anti-monopolist Lizzie Magie invented a game in the hopes of explaining Henry George's single-tax theory. It was created as a teaching tool to highlight the drawbacks of land concentration in private monopolies. Monopoly, the now-ubiquitous winner-take-all board game, was patented on December 31, 1935. (Patent Number 2,026,082). It has been translated into 37 languages and has expanded into over 200 licensed and localized editions for 103 nations throughout the world since then.

Types of Monopoly Board Games

Monopoly is one of the most well-known board games ever. And the game's popularity has resulted in a plethora of various versions, editions, and variations. There are numerous types of monopoly, and the following is a list of them:

How to Play Monopoly Board Game?

Players: Monopoly can be played with as few as two players up to a maximum of eight.

Monopoly can be played by as few as two players up to a maximum of eight players. Before choosing how many people will play, it is vital to be aware of the benefits and disadvantages that each player count entails.

All the money, assets, homes, and hotels that still belong to the bank are under the control of the banker. The banker is still allowed to participate in the game, but they must make sure that their funds are kept apart from the bank. People can help themselves to money, homes, and other properties if the banker places the box where most players can access it and they must only do so when permitted.

The Monopoly board should be unfolded and placed flat. Ensure that each participant has ample room to store their cash and title deeds in front of them. The Community Chest and Chance cards should also be spread out on the board. They have a mark in the middle.

A game piece is given to each player to move around the board. The game offers a wide variety, but you can also use any small object to play. There is no right or wrong piece because they are all used for the same thing.

The banker provides each player with their initial sum of money before the game begins. It ought to total $1500. The majority of players prefer to keep their line up in front of them, but as long as it is in front of you, you can store your money wherever you please. Additionally, players can trade money for several bills of the same value. Providing the bank with $500 in exchange for five $100 bills is one example.

The player who rolls the highest number gets to go first, and play moves around the board clockwise from there. You can choose whether to roll two dice or only one. Going first with the newest or youngest player is a quicker alternative. By skipping the initial roll of the dice, they get a slight edge. After the initial turn, play passes clockwise to the player on the left.

There are Three Methods to End Up in Jail:

How to End the Monopoly Game

It's all about amassing properties and robbing your opponents in Monopoly Deal! Charge rent, swap cards, demand birthday money, and more using Action cards. Make sure you have a large amount of money in your personal bank - and keep in mind that other players will steal from you as well!

One of the most perplexing Monopoly games is Monopoly Deal. There are a lot of things to consider, so here's some advice on how to play Monopoly, commonly known as Monopoly Deal or Mono Deal.

Each player is dealt five cards to begin the game. The rules of the Monopoly card game say that a player can only hold 7 cards in their hand at the end of their turn.

When learning how to play the Monopoly Card game, you need to follow these steps:

Because Monopoly Deal is a monopoly card game, each card is unique and has a specific purpose. Check out this list of monopoly cards.

Sly Deal: Steal a property from another player and add it to your collection as a sly deal. You can't make a card with all of its characteristics. It can also be used to deposit money at a bank.

Deal-Breaker: Steal a whole set of properties from another player and add them to your collection. Brutal! It can also be used to deposit money at a bank.

Debt Collector: Play this card to demand a 5 million dollar payment from another player! It can also be used to deposit money at a bank.

Rent  Card: Charge rent on your property/properties that match the color of the Rent card to other players. It can also be used to deposit money at a bank.

Double the Rent: To double the amount, use a normal Rent card. It can also be used to deposit money at a bank.

House/Hotel: Add these cards to a complete collection of properties to increase the rent value. On any given set, there can only be one house and one hotel. After you've added a house to a property set, you can add a hotel. Houses and hotels cannot be added to the Railroads or Utility sets.

Forced Deal: Swap a property card from another player's collection with one from your own. It can also be used to deposit money at a bank.

Just Say No: You can use this card at any time to cancel the effect of any Action card played against you by another player. They can use another Just Say No card to cancel yours if they have one.

It's My Birthday: You receive M2m from all players.

Multi-Coloured Rent Card: Charge one player of your choice rent on any of your properties using the multi-coloured Rent Card. It can also be used to deposit money at a bank.

Pass Go: Pick up two more cards from the draw pile if you pass Go. Per turn, you can play multiple Pass Go cards. It can also be used to deposit money at a bank.

Property (2 Colour): Property Wildcards can be used to replace property cards that are one of the card's colors. When it's your turn, you can switch these between other sets.

Property (Wild): can be used as a color property. They have no monetary worth and can't be used to make a purchase.

Property Cards: Each card indicates how many properties of that hue you'll need to complete the FULL SET. Railroads and utilities are included in this category.

Money Cards: Put money cards in your bank and use them to pay other players.

The Monopoly card game regulations are in place so that you, the participants, can enjoy the game to its full potential.

Online poker games are fun and interesting, and you can win real money. Download the Spartan Poker app on your smartphone to play online poker games. Go ahead and beat your opponents to win exciting cash prizes in daily real cash games!

1.) How do you play Monopoly game?

You play the Monopoly game online or you can purchase the board game. The objective of the game is to gather as much property as possible.

2.) Is there Monopoly game in India?

Yes there is! You can play Monopoly card games such as Monopoly Deal or you can play any of the several variations of the monopoly board game.

3.) Can you play Monopoly offline?

Since the Monopoly game requires you to play against other players, the only way possible to play this game offline is to play the board games.

The current day Monopoly game was invented by Lizzie Magie as a means to explain the single-tax theory of Henry George in 1903.

5.) What are the basic rules of Monopoly?

Here are the basic rules of monopoly: