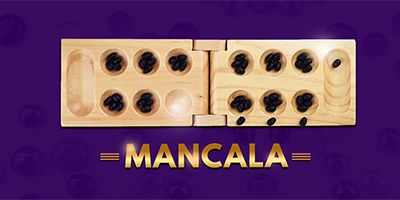 Mancala is an old board game with a count-and-capture theme. Hundreds of variations can be found all around the world. Stones or seeds can be used as playing pieces, and holes dug in the ground or boards with holes can be used as holding cups.

Mancala's heritage comes from Eritrea and Ethiopia, and it dates back to the 6th and 7th centuries, and it is being celebrated today. Mancala comes from the Arabic word "Naqala," which means "to move."

Thousands of years ago, there were references to the game. Although the setting is basic enough to be played on an earthen surface with seeds and holes, there is no significant archaeological evidence to support an earlier origin.

How Do You Play Mancala Game?

There are around 300 different Mancala games; some are easy, such as Kalah or Oware, while others, such as Omweso or Bao, can be quite complex, as they are played on two boards and occasionally in the opposite way.

1 Mancala board and 48 stones.

The Mancala 'board' is divided into two rows, each with six holes or pits. If you don't have a Mancala board, an empty egg carton can be used in its place. Then, in each of the 12 holes, four items (marbles or stones) are inserted. It makes no difference what color the pieces are.

The goal of this game is to see who can fill their store with the most stones.

Mancala is a game that originated in Africa and is one of the oldest games in the world. There are several versions, as with many traditional games, so players should agree on all rules ahead of time.

1.) Is mancala an African game?

Wari, Warri, Awari, Oware, and Wouri are only a few of the various variations played by nations and peoples all over Africa. The game is popular in the Baltic regions of Europe, but it has yet to spread throughout the continent. It traveled to India, Malaysia, Indonesia, and China with Arab culture and trade.

2.) What is the purpose of mancala?

The mancala rules and online mancala tactics are rather simple. The game is not difficult to play if you follow the above-written instructions on how to play mancala.