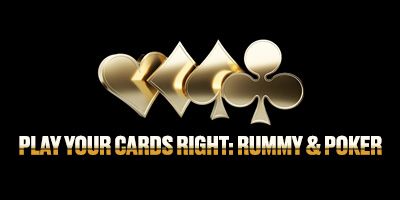 Play Your Cards Right in Rummy and Poker

There are few basic games that every card player should know before they want to enter a casino: and that's Rummy & Poker.

Indian Rummy is a very common game played all across India.

The rules of which are pretty simple as compared to other card games.

The deck of cards used contains 52 cards plus one wild card (the joker). Upto 6 players, 2 decks are used, beyond which players may choose to add a third deck to increase the viability of the game.

The player sitting left from the dealer is the one that initiates the round by drawing a random card from the pack, that would serve as a 'joker' for the game. Any card with the same value as the 'joker' can be used as a wild card throughout the game.

The player on the left then cuts the deck and the dealer distributes thirteen cards to every player.  One card is dealt face up to begin the discard pile and the remaining stack is placed face down on top of the turned-up joker.

Each player has to transform the 13 cards into a combination of sets and sequences.

A set consists of 3 cards of the same value from different suits. Eg 2H, 2D, 2C

However, there is a general rule:

For a player to win, he has to have a 'pure' sequence - that is without the assistance of a wild card to complete the sequence.

As soon as the first player can meet the combinations, they put down their cards.

The remaining players who haven't packed would then be allotted points based on the cards they are holding in their hands.

If the cards they are holding do not contribute to any sequence/sets they are tallied.

The ultimate winner is the one who can maintain the least points.

One normal 52 card pack is used for this game.

Each player receives two cards from a dealer.

These two cards are supposed to be kept private throughout the game.

Apart from these two cards the dealer lays down on the centre of the table 3 cards (that are known as 'flop'.

The objective of this game is to make the best combination of 5 cards.

The players can use the two cards in their hand along with any three cards (or more) from the table.

The players are then presented with two more cards added to the 'flop', to further make things interesting.

The one with the best combination wins - either a sequence, flush, or pair etc.