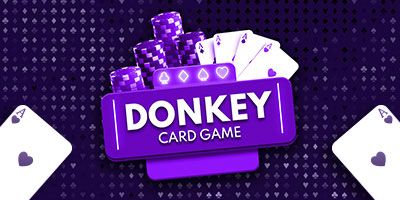 What is Donkey Card Game?

Donkey game is a fast-paced card game for kids of all ages. As the players try not to be dubbed DONKEY, they make sneaky movements and have a lot of fun.

Players pass cards to the player on their left one at a time. They can't pass another card until the player on their right has taken up the one that was passed to them. Players keep doing so until they have a four-of-a-kind in their hands. When a player makes a four-of-a-kind, they place their cards face down and their hands under the table discreetly. Other players should silently put their cards down and place their hands under the table as soon as they detect this. The last player to notice must jump up and gallop around the table like a donkey, saying hee haw.

How to Play Donkey Card Game?

Each player's goal is to finish all of the cards in their hand. The rules of the donkey card game will assist you in achieving this goal. Each player must first discard all of the pairs of cards in their hand. If you have two 7s in your hand, for example, they form a pair. The first part of the solution to the question, "How to play donkey card game?" appears here. Each player eliminates a number of pairs. Finally, each player has a few cards that aren't paired.

Types of Cards: The joker is not used. You can play donkey card game with a standard deck of cards.

Dealing of cards: Even though the dealing may not be fair, the game starts with each player receiving the entire deck. Some players can have more cards than others.

Objective: Each player's goal is to finish all the cards in their hand.

Gameplay: The following section offers tips for how to play donkey card.

The players alternate passing a card to their left-hand neighbor and receiving a card from their right-hand neighbor. This pattern of play continues until one player has four of a kind in their hand. When they have all four cards, they lay out their complete deck face down on the table. They then do the same with their hands and put them under the table.

The other players must take notice and imitate you by placing their hands under the table and placing their cards face down on the surface. The last person left holding cards is dubbed the Donkey and is required to circle the table while yelling "Hee Haw."

How to Decide the DONKEY as Per Donkey Game Rules!

The first step is to take one card out of the deck and hide it. All of the cards are spread evenly among the participants. The card is passed to the next player by the player who decides to play first. The player who received the card must see if he or she can construct a set of two identical cards, such as two queens. He can put the set in the middle of it has been formed. He can give the card to the next player if he doesn't have it. The 'donkey' is the person who is left with only one card at the end of the game.

What are the Rules of Card Game Donkey?

When learning how to play the donkey game, you must also learn the donkey card game rules, which are as follows:

Online poker games are accessible 24 hours a day.  Some poker games that you can play on your smartphone are Texas Hold'em, Omaha, Omaha Hi-Lo, and Chinese Poker. Get the Spartan Poker app for your phone right away and start playing online poker now!

Players aim to make four of a kind. They keep the cards face down on the table and place their hands under the table. The player who fails to notice this is the donkey and runs around the table saying hee haw.

2.) What are the rules of card game Donkey?

3.) How many cards are there in the Donkey game?

A standard deck of 52 cards without jokers is used to play the donkey card game.