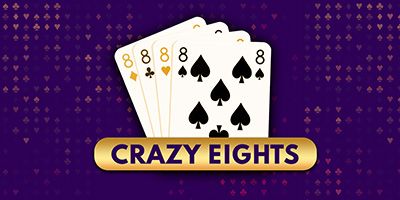 Have you ever played cards when kids are around you? If yes, then you know how excited they are to play with the extra cards that are kept aside. Kids love to mimic elders.

Crazy Eights is a card game that is played like Uno. What’s interesting is that Crazy 8s is played with a standard deck of cards. Two or more players can play. One deck of cards is enough for four players. If there are more than five players, two decks of cards are needed.

The goal of players in the crazy 8 game is to be the first player to discard all the cards and get the least number of points.

The cards Ace to King are used to play the Crazy Eights game.

As we saw above, the goal of the players in the crazy eights card game is to score the least number of points.

The face cards are worth ten points each whereas if a player has an 8, they will get 50 points. That is the reason this game is named Crazy Eights!

We will find out how to play Crazy Eights in more detail ahead.

How to Play Crazy Eights?

Here are the rules of how to play crazy eights.

Rules are important. When you are playing cards, they are to be followed as well! Watch out for the Crazy Eight rules!

Crazy 8s rules are easy to understand. Have a look at the rules listed below.

Poker is a great game for social gatherings like Crazy Eights. So far, you have understood the rules of Crazy 8. Let us now see what is poker?

Poker is a card game that can be played for real money. Players intimidate other players and use poker strategies to eliminate other players from the game. If there is more than one player in the game, there will be a showdown to see the strength of the cards. The player with the best poker hand of five cards is the winner of the game

Spartan Poker is a platform that hosts online poker games daily. Go ahead and download the Spartan Poker official Poker app on your mobile phone now! Play up to Rs 30,000 daily. See you at the poker tables!

The name of the game is crazy 8 because it is popular card game in which players try to get rid of their cards by playing a matching rank or suit on the previous card played. If they are unable to do so, they must draw an additional card. A player who plays an eight can dictate the Playing card suit to be played next.

Even though there are a few distinctions between UNO and Crazy Eights, they can be called the "identical" game. The most significant distinction between the games is that Crazy Eights is played using a conventional deck of cards, but UNO game is only played with a specific deck of UNO cards.

Q.3) What does Jack mean in Crazy Eights?

Jacks are a wild card that can be used at any time. The next suit to be played must be specified by the player. The first player to play may play any card if the first card turned over from the deck following the deal is a Jack. The number eight is a skip card.

Q.4) How do you play Crazy Eights countdown?

Players can play an 8 as a wild card, or they can match the suit or card value in this example, ace. The next player has a turn, matching the suit, card number, or playing an eight. The individual who receives an 8 gets to choose which suit they want to switch.