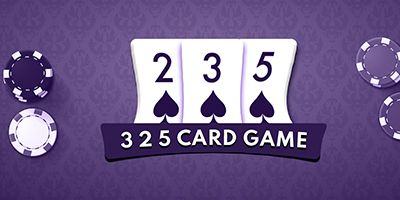 Want to play a simple and fun card game? Try the 3 2 5 game! It is a popular game in South Asia. We Indians love it! Teen Do Paanch or 3 2 5, is a trick-taking card game that is played with three players. Players are obliged to take 3, 2, and 5 tricks respectively.

What is the meaning of taking tricks? The three players in the 3 2 5 game put one card on the table (turn by turn). The player who has the highest-ranked card of the suit takes all the cards. Taking all the cards in a round means winning a trick.

A player who meets their target and wins more tricks than they are assigned is the winner of the 3 2 5 game.

Players: Exactly three players can play the 3 2 5 game. One of them plays the role of the dealer. The player on the dealer’s right selects the trump card.

This means that there is a total of 5+3+2=10 cards with every player, including the dealer.

Let us now see how to play 3 2 5 game in further detail below.

What happens when a player wins more tricks than they are assigned? They get to pull cards!

There are two scenarios where cards aren’t pulled:

Want to play more card games like the 3 2 5 game. Have a look at the variations of the game below.

That was about the 3 2 5 or 2 3 5 card game rules and the two variations. If you are someone who loves playing cards, then you should know about a fantastic card game known as poker. Below is the difference between poker vs 3 2 5 game for your reference.

Poker is one of the most popular and played casinos across the globe. Real money gaming is thrilling and rewarding. If you think that you have the skills to beat all your competitors and steal the prize pool, download the Spartan Poker official poker app and start gaming! Use your best mental skills and throw out all your opponents to be the winner! Play now!

Learn to play poker with freerolls on the Spartan Poker app. Use your skills and beat competitors. Download the Spartan poker app to win Rs 1 lakh daily!

3 2 5 card game is played by three people with 30 cards from the deck. The card game excludes all cards with values less than eight and only includes the 7 of hearts and 7 of spades.