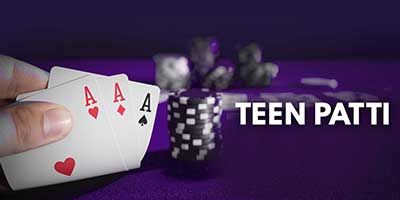 What is Teen Patti?

If you've only recently heard about Teen Patti, and the game's name entices you to look for a site that offers this popular card game, you can read the introduction before getting started. Teen Patti, often known as ‘Flush' or ‘Flash,' is a popular card game variant in India. The game is won by the player who has the best combination of cards in his hand. Teen Patti is a highly competitive game that originated in India and is now extensively played in casinos by a large number of participants.

How to Play Teen Patti?

The rules of Teen Patti are quite similar to those of 3 Card Brag. Teen Patti is a game that can be played with three to seven people. In this game, a single 52-card deck is utilized, with the jokers from the deck being discarded. The game plays out similarly to a game of poker, with the dealer dealing three cards to each player. These are distributed in an anti-clockwise orientation, face down. In the Teen Patti games, the dealer is also a participant player. On the following hand, whoever wins a hand becomes the dealer. The player who is sitting on the left of the dealer starts the game.

Look at the Rules below to play 3 Patti cards.

Teenpatti rules are basic and straightforward. The Aces are at the top of the list, while 2 is at the bottom. The goal is to have the best three-card hand and increase the pot before the game ends. Remember that knowing the various hand rankings is just as crucial as knowing the betting rules before engaging in a game of Teen Patti.

Have a look at all the 3 Patti hands below.

Now you have a basic understanding of hands and how a teen patti sequence is formed. You can play any variant to win 3 patti real cash.

Teenpatti rules are not complicated. However, every player must know it well enough before investing in the game. Below is a glimpse of the teen patti rules chart.

Finding the most popular alternative to playing Teen Patti? If yes, then you can play Joker Teen Patti. Players use wild cards in the Joker Teen Patti variant to add to the fun of the game. Players choose a random card from the deck and use it as a wild card. After that, the dealer chooses all additional cards with the same rank, number, and strength as wild cards. Wild cards can be used to complete a hand if all other rules are followed.

The most popular way to play Teen Patti is the banko style. Banko follows the turn-by-turn pattern of play in the same way that Teen Patti does. That is, before playing, players must wait for their turn. At the start of the game, each player is given three cards. The dealer opens two of each player's cards in their turn, leaving one unopened. The player must then bet after deciding whether the last card will be within the numbers on the open cards. If players guesses correctly, they will stay in the game; if not, then they are out. The game continues in this manner until only one person remains; the final player wins the pot.

The rules of AK-47 Teen Patti are like those of standard poker, with the exception that the Ace (A), King (K), 4, and 7 become wildcards, similar to the Joker cards. That implies you can use any of the wildcards to form a hand. With 16 wildcards in play, AK-47 Teen Patti ensures a rapid way to get a complete hand. If a player has a trio of A-4-7, for example, this becomes A-A-A. The rest of the rules are the same.

You cannot miss out on Revolving Joker with several varieties of Teen Patti revolving around the Joker. Although this game follows the rules of regular Teen Patti, the Jokers are not the same throughout the game. The dealer places three Jokers on the table at the start of the game, and the game proceeds as usual. The Jokers are replaced with new ones when a player folds or packs. This will continue until either the pot reaches its maximum value or there are only two players left in the game for a showdown.

This game, sometimes known as Lowball, is similar to standard Lowball in Poker in that the card combinations are ranked in reverse order. The combination with the highest-ranking now has the lowest ranking, and vice versa. Mufliss is played similarly to traditional Teen Patti, with the exception that the player with the lowest combination wins the round and the person with the highest hand loses. In standard Teen Patti, if one player has A-A-A and the other has 3-2-5, the player with A-A-A wins and the other player loses. Mufliss Teen Patti, on the other hand, is the polar opposite.

999 Teen Patti, while popular among gaming fans, is not the same as classic Teen Patti. In this variation, the person who has a whole hand that is closest to 999 wins.  Face cards are counted as zero in this game (K, Q, J, and 10 of any suit). The rest of the cards are counted as per their numbers while A is counted as one. It's worth noting that the order of the cards can be arranged to reach a higher total. This means that instead of 9-0-9, a 9-Q-9 can be transformed to 9-9-0.

4X Boot Teen Patti is the game of choice for those who enjoy boots or pots. While all of the rules from the classic game apply, the boot size is the only difference. The boot's value is four times that of a regular Teen Patti, as the name implies.

3-2-1 Teen Patti version follows a whole different set of rules. Each player is assigned six cards at the start of the game, which they must divide into three parts. The first part will have three cards, the second will have two cards, and the third will have one last card. Players are free to distribute their cards in any way they want.

Following the setup, the game begins with the players placing bets. The three cards come first, followed by the two cards, and finally the single card. In 3-2-1, a player must have the highest hand value in two rounds to win. That is, you must win two of the three-card, two-card, and one-card rounds. The game repeats if no one wins.

The Cobra Teen Patti is also known as Maatha. Before the game begins, the players agree on a specific amount and each contributes to the pot. The dealer then distributes one card to each player. Each participant then places the card on his or her forehead without checking the cards. Each player can see their opponent's card but not their own. The player who has the highest card value wins.

Let us now have a look at how to win at Teen Patti.

How to Win at Teen Patti?

The following are the top 3 Patti game strategies for winning the game. Have a look at how to play 3 Patti to win.

The following are the many moves in the teenpatti game. Going through them will help you understand how to play 3 patti.

Below are the differences and similarities between playing 3 patti online game and poker online.

Ever felt the adrenalin rush of a showdown? It drives players to match the bet and pray they have the best hand rankings. Whether you are just starting to play poker in India online, or you have been playing it for years, Spartan Poker brings you some of the most exciting mobile games and poker tournaments so you can play online poker in India online.

Spartan is the biggest and best platform to play online poker in India. At Spartan, you will learn all the best poker tips and tricks and stand a chance to take home big prize money. Compete with the finest poker players in our tournaments and? online poker games, with guaranteed prize money at stake! If you want the royal treatment, join our VIP Club and unlock amazing rewards. At Spartan Poker, we make champions and you can be the next! With our simple 3-step registration process and our welcome bonus, you can be up and playing in no time at all in some of the finest online poker tournaments around. Whether you want to play Texas Hold’em, 7-Card Stud, or Omaha Poker, our game rooms will cater to your choice of poker game. Easy to use, fast, safe, and with a community of players ranging from beginners to pros, Spartan Poker delivers an unbeatable gaming experience.

Play real money poker on Spartan Poker and have a fun experience! So, what's holding you back? Come join in the fun and try your hand at some of our outstanding poker games.