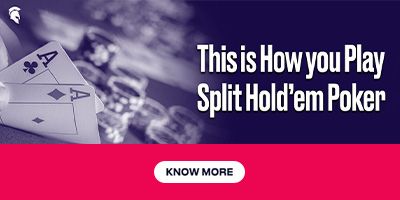 This is How you Play Split Hold’em Poker

Throughout centuries and across cultures, one thing remained common about the poker table; it's been about the many variations that have been introduced from time to time. Poker is a game entirely about variety where there is something for everyone to practice and master. The split Hold’em cash game is the latest to join Poker's long list of innovations. The introduction of such poker variants has essentially been possible through online Poker, where a multitude of poker players connect, compete, and share ideas.

Those familiar with home games like Texas Hold 'em and Omaha and 7-Card Stud won't find this variation to be as unusual in its structure. From betting patterns to poker hand rankings, when you play split Hold'em Poker, you are bound to find a lot of similarities between this and other game types. You should know that split Hold'em plays much like traditional Poker for those unfamiliar with card games in general. However, the notable difference here is that there are two separate sets of community cards. This leads to two flops of three cards, two turns, and two rivers.

Regular No-Limit Hold 'em players will not find split Hold'em to be a challenge, not as far as the rules and format are concerned. Hand rankings are identical from the High Hand up to the Royal Flush, and so that should not confuse anybody, not even novice players. The big difference to take note of here is that the prize pot is now split between two boards, as we see in hi-lo games such as Omaha, Stud, and other similar variations. The player having the best poker hand on one end of the board is awarded half the pot while the player holding the best hand at the other side wins the other half.

Yes, one single player can have the best poker hand across both boards. In such a case, that particular player bags the entire pot, and no splitting will take place. Other crucial aspects to a poker game include variables like betting rules, and that sees no change here and should not cause confusion among the regular players. You go about making your bets and calls just as you would in any other form of No-Limit Hold 'em game. The change in Strategy that you will have to make here is that you must consider two sets of community cards instead of one like you are used to doing so long.

The poker community has always been a healthy and competitive group of individuals who have always supported one another, although remaining rivals at the table. They have always been vocal about the platform they have been on and don't shy away from giving suggestions and helping one another. This is why, as a beginner, checking out poker community threads would be a very beneficial way forward for you. That being said, with early announcements being in about this new variation, most poker players have made their stance known in promoting innovation. While rake remains a subject of debate regarding split Hold'em, the discussion is likely to grow as this variation gets more exposure.

Although there hasn't been much gameplay to support spot-on theories, we know that split Hold'em is a refreshing introduction promising a ton of action for players who do not fold, especially with low stakes on the line. With two boards, most players are more than likely to form some poker hand, and so the board is loose, at least at first glance. Small pairs will be down in value as you play these for sets, and the chances of flopping two such sets are unlikely. You must be careful while playing with suited connectors while being in position and having control. Also, trying to bluff the fish won't do you any good. Sticking to tight Strategy and a simple plan would be a good start with the split Hold'em.

And that was Split Holdem, a brand-new inclusion to the already vast library of variations that Poker has accumulated over the years. Like with most other variations, practice and patience are necessary with this one as well. If you are knowledgeable and experienced with Poker, you might not have any problems. If you are an absolute beginner, visit the official Spartan Poker website and educate yourself about the game as much as possible before giving Split Holdem a try. Once you think you have the data you need, try your hand in one of our many poker tournaments to build your confidence. After all, Spartan offers Poker to players of all skills to enjoy and cherish cards. So, if you haven't already, sign-up and login to Spartan and get started with your poker career.